The Truth About Human Life:

The Intuition of the Whole

It is in childhood that the idea of "God-Apart", or "Reality-Beyond", is conceived. The sense of dependence initiates the growing sense of separate and separated "self" through the "experiential" theatre of growth.

The intuition of the Whole, the One, is the ground of birth — but "growing up" is a conventional pattern of initiation in which the sense of "difference" is intensified.

At the conventional level of the life-functions themselves, there is a need for such functional practical differentiation. However, in the plane of consciousness, the presumption of "difference" gives rise to an unnatural adventure of suffering and seeking-in-dilemma. 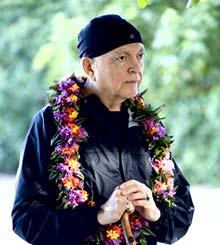 The passage of childhood thus becomes the ground for the eventual conception of the mutually exclusive trinity of "God-Apart", "separate self", and "world-in-itself" (any "world", high or low).

The drama implied in the added presumptions of "independent self" and "objective world" is generated at a later phase of life than childhood. The child barely comprehends the full force of implication inherent in the concepts of "ego" and "world-of-things".

The child's principal concern is relative to the "God-Parent-Reality" (or That on Which all depends), and relative to his or her growing (but, as yet, not fully conscious) sense of separated "self"-existence. "Separate self" and "objective world" are yet hidden in unconsciousness for the child. They are (themselves) a mysterious and later comprehension of that which is (at first) only felt, not conceptualized, as fear and sorrow.

Therefore, the child is always grasping for permanent security in a non-differentiated, un-born bliss, wherein the threats implied in life are forgotten and unknown.

Re-union through obedience is the manner in which the living child learns in secret, while the life that grows the child through "experience" continually demonstrates the failure of all childish seeking.

Part Three: The Transition from Childhood to Maturity