In this time of uncertainty, we wish everyone health and safety.
Dogma of Atheism

The Truth About God

The Dogma of Atheism

Atheism is the ultimate form of denial of the Parental "God". Atheism is not founded on real observation of the ultimate facts of the universe. Rather, it is a kind of adolescent development of the human species.

What characterizes the doctrine (or dogma) of atheism is not a discovery that there is no "God", but a refusal to acknowledge every kind of parent (or parent-like authority), including (therefore) the Parental "God" of childish "religion".

— from "The Parental Deity and The One To Be Realized"

Atheism (or the conception that no "Creator-God" — or any other Greater Reality — exists) has always opposed theism (or "God-religion"). Nevertheless, atheistic ideas are the product of the same fundamental egoic consciousness that otherwise produces theistic (or conventional "religious") ideas. 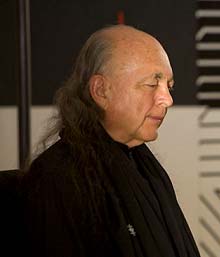 Atheism is the product of the ego (or the phenomenal "self", grounded in elemental perception), and so also is theism. Atheism, like exoteric "God-religion", extends itself only into the domain of the first three stages of life — whereas esoteric "God-religion" provides a means for entering, mystically and Spiritually, into the developmental processes of the fourth stage of life and the fifth stage of life.

Atheism regularly proposes a "logic" of life that has its own dogmatic features. It does not propose a "God"-idea but, instead, founds itself on and in the perceptual and phenomenal mind alone.

Atheism concedes only a universal and ultimately indifferent (or merely lawful) cosmic Nature (not a "God") — and, so, there is no need to create a "religious creation-myth" to account for suffering. (And atheistic thinkers thus generally confine themselves to constructing a cosmology, based on material observations alone, that merely accounts for the apparent workings of the conditionally manifested events of cosmic Nature.)

Indeed, just as conventional "God-religion" (or conventional theism) arises to account for suffering, atheism arises on the basis of the unreserved acknowledgment of suffering. And, if there is no idea of "God", there is no idea of the human being as "creature" (or, in other words, the human being as the bearer of an immortal, or "God-like", "inner" part). Nor is there any need to interpret unfortunate or painful events as the "effects" of "Evil".

The realistic (or atheistic) view is just as much the bearer of a myth (or a merely conceptual interpretation of the "world") as is the conventional "religious" (or theistic) view. Atheism (or conventional realism) is a state of mind which is based in the phenomenal "self" and which seeks the ultimate protection, nourishment, pleasure, and preservation of the phenomenal "self" (at least in this "world" and, if there should be an after-life, then also in any other "world").

The essays collected in The Self-Authenticating Truth illuminate Avatar Adi Da's Calling for the "radical" simplicity of the devotional Way of Adidam, and profoundly magnify the philosophical "consideration" that He brings to humankind.