In this time of uncertainty, we wish everyone health and safety.
A Deep Seated Change

"I Make No Distinction Between Beings" - by Stuart Camps

When I arrived at the Mountain Of Attention, I had a basic knowledge of animal husbandry, but that was all — no formal training in zoology or veterinary sciences, no real working experience in a zoo. And so, during the first two years of my training at Fear-No-More Zoo, I was frequently in despair.

I constantly felt that I lacked the needed knowledge and sensitivity to help create and manage such a place. I worked hard to learn all that I could about each respective animal's care. In retrospect, this rapid (and, to me, frightening) learning curve deepened my sensitivity to the animals more than any formal training would have.

Still, I struggled with this service to Adi Da and Fear-No-More. In part, I simply did not want the lives of these animals as my responsibility. And the more I came to know them, the more this responsibility weighed on me.

Then, one summer afternoon, Cinnabar, a beautiful and very relational red panther chameleon, died in my hands from overheating. There was no time to call for a veterinarian. I had miscalculated my handling of him on this very hot afternoon, and before I knew it, Cinnabar was gagging, his dark, cone-shaped eyes beckoning me for help.

I rushed him to a bucket of cool water and held him in it, hoping he would cool and be all right. Finally, though, his body went limp and he expired in my hands. I was distraught. I wept over losing this close friend.

I communicated Cinnabar's death to Avatar Adi Da, who was in Fiji at the time. He was, understandably, very upset that this chameleon devotee of His had been lost through my lack of knowledge.

I wanted to quit the zoo. I could not take it anymore. But, after several days of struggling with myself, I resolved to stay, concluding that I had no real choice but to embrace the zoo and all its animals as fully as I could.

And with that, I moved into the zoo, into a small cleaned and painted shed right inside the emus' enclosure. I was determined to stay there, living alongside the animals, until I felt a significant change in the developing quality of the zoo and in my sensitivity to the animals.

As I set about doing whatever needed to be done to make things right, my own life was changed, deepened, and simplified. I began to learn how to "feel" the animals better, to sense their needs, and to communicate with them.

Funding and support began to flow from many people within the community of Adidam, and myself and some friends began to further develop and beautify Fear-No-More Zoo so that it could be an even fuller embodiment and demonstration of Avatar Adi Da's Vision.

Sphere of the Master's Work 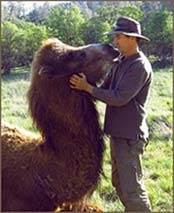 My own continuing trial by fire, Avatar Adi Da's ongoing instruction about non-humans, and the progressive incarnation of this zoo of Fear-No-More, all stem from my Spiritual Master's blessing-intention to sensitize and re-align the human community of Adidam (and ultimately, all humans) to a wholly respectful, loving regard and responsibility toward all non-humans.

It is my intuition that, in time, the effects of this will be far-reaching for non-humans, and humans, everywhere.

In the Divine Avatar's own words, He explains His profoundly simple message about the essence of all beings:

At heart, all are One. At heart, a human being is not the slightest bit different from the reptiles, the birds, the former dinosaurs, the elephants, the plants, the trees, the wind, the sky, the microbes.

Apart from their function in conditionality, all beings are the same. Human beings are not uniquely to be saved. All beings, even all of conditional manifestation, is the sphere of My work.

I do not make the slightest jot of distinction between a human being and any other form or appearance. There is none to be made.

Fear-No-More Zoo expresses Avatar Adi Da Samraj's love and respect for all beings. One purpose of the Zoo is to give people the chance to experience and appreciate the spiritually contemplative nature of non-human beings.

Fear-No-More also provides Avatar Adi Da with a tangible focus point through which He Blesses the entire non-human world.

In the
Garden of
Fear-No-
More