In this time of uncertainty, we wish everyone health and safety.
The Sacredness of Hermitage

"I Make No Distinction Between Beings" - by Stuart Camps

Part 2 - The Sacredness of Hermitage

A month later, I was standing on the headlands above the small cove named Banyan Bay. Two hundred feet below me, a pair of giant manta rays slid through the emerald-blue lagoon. A storm was building out to sea, and its forward winds began whipping across the bay and dragging on the stunted trees around the rocky headlands. The rays headed out to deeper water.

I climbed higher until I could see right across the rugged island, which was now deluged in rain. The wind was heavy, pushing on me. I had to lean into it to stay upright. It was beautiful, pristine, and wild. 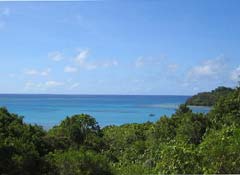 My senses heightened. I felt immersed in the interplay and dependency between sky and sea, land and trees and animals, signing the mysterious unity between everything.

As I came to accept the island, the trees, the ocean and the weather as conscious, living, beings, I also came to realize that Adi Da Samrajashram is one of the principal forms of Avatar Adi Da's manifestation in this world. Through His Spiritual Empowerment of Adi Da Samrajashram as His Hermitage Retreat, this island has come to serve as a potent vehicle and sign, a sacred place from which Avatar Adi Da's Presence Blesses the entire world.

I regard having seen and felt Adi Da Samrajashram's living nature as a gift, one which continues, even today, to guide my deepening understanding about this mostly non-human world in which we humans define ourselves.

The Move to California

In 1993, after having lived in the Adidam community in Melbourne, Australia for a few years, I moved to California to serve an apprenticeship at Fear-No-More Zoo, under Avatar Adi Da's guidance.

In the mid-1970s, when He still lived at the Mountain Of Attention Sanctuary in California, He began revealing His vision of Fear-No-More as a holy place, to be created from a deep love and understanding of non-humans and their real nature. 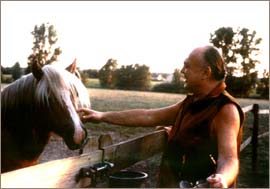 He named it "Fear-No-More" for three reasons; to remind us that captive non-humans must be granted their lives free from unnecessary fear; to point to the non-humans' inherently contemplative spiritual disposition; and lastly, to call all humanity to the very same communion with the Divine which these non-human beings enjoy.

It is this recognition of non-humans as contemplative Spiritual beings that is the central sacred and humane principle upon which Adi Da created Fear-No-More.

>He has spoken at length about the contemplative nature of non-humans:

Non-humans exhibit a kind of natural predisposition to contemplate, to feel beyond — even beyond waking, dreaming, and sleeping — to a depth domain.

They do this freely, voluntarily — they enter into this pleasurable, deep swoon into the Source-Domain. 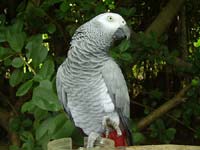 Through Avatar Adi Da's insistence on our recognition of this one point, and His ongoing guidance to the animal care-givers and His devotees at large, Fear-No-More Zoo has gradually grown into a place where one can go today and be drawn into that real contemplative disposition which the non-humans enjoy.

He Has Given the following guidance about how Fear-No-More Zoo can be rightly used:

Feel what its particular components are. The more I get to do what I intend there, the more you will observe it. But even as it is, as simple as it is, it immediately awakens a certain congenial disposition in you, if you go down there sensitively, of course. It's another place of worship, a kind of walking, petting worship.

It awakens compassion for all living beings, just being down there. And a feeling of non-"difference", of unity. I spend a lot of time around non-humans.

To Me, they are the same as human beings — in the ultimate sense, the same. I do not imagine them being lowly or separate, or different in any sense whatsoever. And that's what you should realize when you go there.

That's how you should use it, to support your development. All the places of the ashram are sacred, have a special meaning, purpose, and significance, a special purpose.

And the zoo is one of them. It's about "fearing no more", about going beyond the knot of separate self, being in the condition of communion with Me, and (at the level of form) feeling structured in a great unity.

Next: A Deep Seated Change

In the
Garden of
Fear-No-
More