In this time of uncertainty, we wish everyone health and safety.
The Ruchira Sannyasin Order of Adidam

The Ruchira Sannyasin Order of Adidam

Avatar Adi Da devoted much detailed consideration and gave much detailed Instruction relative to how the integrity of the Reality-Way of Adidam would be preserved into the future, throughout all the centuries of human history after His physical Lifetime.

The principal means He established for preserving this integrity is the founding of a unique esoteric order, named "the Ruchira Sannyasin Order" (meaning "the order of formally established legal renunciates who are entirely devoted to the Avatar of the 'Bright', Adi Da Samraj"). 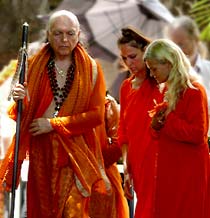 The Ruchira Sannyasin Order is the body of Avatar Adi Da's most advanced devotees who have chosen to consecrate their lives utterly to Him and His Reality-Way.

Ruchira sannyasins embrace a life of formal renunciation — dedicating themselves to a life of "perpetual retreat" and legally renouncing all ownership of property.

The Ruchira Sannyasin Order of Adidam Ruchiradam... is (and must always be) the most senior gathering of (necessarily, formal) practitioners of the only-by-Me Revealed and Given Reality-Way of Adidam.

The Ruchira Sannyasin Order of Adidam Ruchiradam is the hierarchically central (but entirely renunciate, and non-managerial) one and only culturally governing authority among, and in relation to, all the (necessarily, formal) practitioners of the only-by-Me Revealed and Given Reality-Way of Adidam....

All members of the Ruchira Sannyasin Order of Adidam Ruchiradam... are, by Vow, Called and Expected (by Me) to be uniquely exemplary in all the disciplines and practices of the only-by-Me Revealed and Given Reality-Way of Adidam, and to demonstrate that total practice of the Reality-Way of Adidam in the context of the life-discipline of perpetual retreat.

As a necessary sign of qualification for full membership in the Ruchira Sannyasin Order of Adidam Ruchiradam..., the essential characteristic (and uniquely intense and comprehensive demonstration) of indifference toward the "world"-in-and-of-itself, toward merely "worldly" purposes, and toward "worldly self-fulfillment" (and egoic "self"-fulfillment altogether) is required as a constantly evident demonstration in practice.

Additionally, Avatar Adi Da indicated that the members of the Ruchira Sannyasin Order collectively function as His "Instruments", allowing Him to Magnify His Transcendental Spiritual Work for all time:

My Instrumental Ruchira Sannyasin devotees are (necessarily) individuals... who are (thus, during, and, otherwise, after, the physical Lifetime of My Divinely-Avatarically-Born bodily human Divine Form) fully accountable to Me, and profound in their devotional recognition of Me, and profoundly devotionally responsive to Me — and who are (necessarily) formally practicing the "Perfect Practice" of the only-by-Me Revealed and Given Reality-Way of Adidam.

Because they are (thus) conformed to Me, I can (now, and forever hereafter) Use such Instrumental Ruchira Sannyasin devotees as a collective "point" of contact for My Divine Avataric Transcendental Spiritual Blessing-Work, and such Instrumental Ruchira Sannyasin devotees themselves can (now, and forever hereafter) collectively function as a Means of focusing the devotional recognition-response to Me (or the right devotional approach to Me and the right devotional Invocation of Me) in the total "world".

In Working through such Instrumental Ruchira Sannyasin devotees, I Respond (and always will Respond) to everyone (including each and all of My formally practicing devotees, and including even all beings — both human and non-human), in all the various particular areas of this "world" (and in even all "worlds").