In this time of uncertainty, we wish everyone health and safety.
Introduction To Adidam

In 1972, Avatar Adi Da established Adidam, a way of life founded on His unprecedented Divine Revelation and Wisdom. Through the gift of Adidam, Avatar Adi Da offers His devotees the opportunity of participation in a unique esoteric school of practice, in direct relationship with Him. 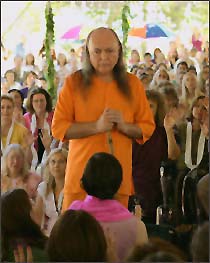 From the very beginning, Avatar Adi Da's devotee receives the Heart-Revelation that He is the Divine Reality Itself, mysteriously appearing as a human being.

It is this Revelation that Awakens devotion, rather than any "self"-generated effort. And the absence of "self"-effort or seeking of any kind is what makes devotion to Avatar Adi Da "radical".

Direct recognition of the Divine is not mere belief. It does not awaken in the mind or the body, but at the very core of being.

The mind and the body often have quite a bit of work to do in order to adapt to what the heart has been shown — and that work is the devotional practice of "right life" in Adidam.

Even as the body-mind's adaptation to right life matures, Avatar Adi Da also calls His devotee to consider and be established in the "Perfect Knowledge" of Reality Itself.

And so, practice in Adidam can be understood as having three fundamental facets: "radical" devotion, right life, and "Perfect Knowledge".

Throughout human history, there have been Spiritual Masters who were Awake to a deeper Realization of Truth than that which informs ordinary human culture.

These great lights of the human race often worked tirelessly to serve the Spiritual advancement of those who gathered around them.

While Avatar Adi Da lived and practiced in relationship to several great Spiritual Masters, He Himself is not rightly appreciated as simply an Awakened Master, or one who has practiced and attained a significant level of Realization.

Instead, His Appearance is the direct Intervention of Conscious Light Itself — the Very Divine Reality within Which all apparent individuals appear and disappear. The great Gift of His Incarnation and His establishment of the Reality-Way of Adidam makes Perfect Divine Enlightenment possible for all who fully embrace His Way.

When people recognize Who Avatar Adi Da Is, the fire of that recognition moves them to embrace the devotional relationship He offers and become His formally committed devotees. The name "Adidam" refers to both the gathering of Avatar Adi Da's devotees and the practice He has Given them.

The Necessity of a Guru

Avatar Adi Da opens His essay "The Great Esoteric Tradition of Devotion To The Adept-Realizer" with this statement:

Spiritually Realized Adepts ... are the principal Sources, Resources, and Means of the esoteric (or Spiritual) Way. This fact is not (and never has been) a matter of controversy among real Spiritual practitioners.

Every great religion began with the appearance of a living Spiritual Master. In the esoteric traditions, devotion to a Master has always been acknowledged as the necessary means for Awakening to Spiritual Truth.

However, most of human culture today does not enjoy this wisdom. At best, Westernized society views Adepts, Masters, and Gurus as religious "middle men". And so, people often ask, "Why not turn to God, the source of life, directly, for inspiration and enlightenment?"

Those who have spent many years of do-it-yourself practice often gain a very different view. They learn through the school of hard knocks that there is nothing very "direct" or ultimately effective about such solitary attempts.

The Ego Cannot Liberate Itself

Independent seeking for Divine Enlightenment does not fail merely because it is a tough road to travel. It fails because, as Avatar Adi Da has said in many ways, the ego cannot Liberate itself.

Avatar Adi Da describes, in penetrating detail, the feeling of dis-ease or dilemma that motivates seeking of any type. He says that all such feeling grows from the one chronic activity that is the very source of the sense of separateness and separativeness that plagues humanity.

Every imaginable form of human suffering derives from this singular error — the painful illusion that "I" is a discrete, mortal entity, separate from all "others" and somehow separate from the One Radiant Divine Consciousness in Which the entire play of existence is experienced.

And so the ego's attempt to free itself is as much an impossibility as trying to pick up a board while standing on it. Only devotional recognition-response to the Incarnate Divine Revelation opens the being to the Grace of Divine Enlightenment.

The humanly incarnate Spiritual Master is Divine Help to the advantage of those in like form. When My devotee enters into right relationship with Me, changes happen in the literal physics of one's existence.

That transformative process is enacted in My devotees in (and by Means of) My Divine Avataric Company....

If you enter into the devotional relationship with Me, then the Divine Process begins to duplicate Itself in your case. It is not as if you are a robot that is being transformed through the effect of some computer — no. The Process is a living and human relationship with Me.

Next: The Reality-Way of Adidam

Every great religion began with the appearance of a living Spiritual Master.

In the esoteric traditions, devotion to a Master
has always been acknowledged as necessary for Awakening.

The Need for
The Spiritual Master