The ability to make image-art that is Transcendentally Real, that is about egoless coincidence with Reality Itself, is what I have been working on for many years....

The viewer will always tend to exercise a "point of view" — but the viewer of the image-art I make and do will be confounded (and, hopefully, served to the degree of true aesthetic ecstasy) by the "point-of-view" less characteristic of the image-art.

Such is the intention I have in making image-art — to draw the viewer into egoless (or "point-of-view"-less) participation in Reality Itself.

Deeply involved in the artistic process since childhood, particularly in the last nine years of His Lifetime, Avatar Adi Da created a massive body of highly distinctive and diverse artwork.

In that nine-year period, He "stretched" the mediums of photography, videography, and digital image-creation in many directions. His monumentally fabricated artworks have been internationally exhibited and acclaimed, including a solo collateral exhibition at the 2007 Venice Biennale.

Avatar Adi Da saw His art as built upon the modernist tradition. He greatly valued the radical aesthetic freedom and the profundity of meaning that is characteristic of modernism at its best. 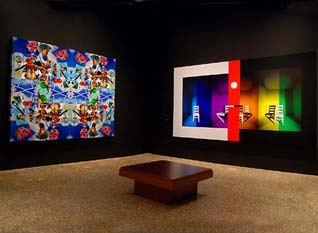 As Avatar Adi Da makes clear, His art can be "read" as an immense investigation of the human condition — the condition of presumed existence as a "self" in the midst of a world that is "not-self".

Avatar Adi Da Himself has always lived and demonstrated non-separateness. And His constant effort has been to fully communicate the way of non-separateness — whether through writing or image-art or Silent Blessing.

Reality Itself Is Truth Itself

Is The Beautiful Itself.

Ultimately, this is the vision He conveys through His art. Thus, He offers His art to the world as His communication of Reality and Truth — and, also, as an address to the "human necessity" for the "aesthetic experience of real and true beauty".

For more about the Divine Image-Art of Adi Da Samraj, including past and present exhibitions and publications, please visit: