In this time of uncertainty, we wish everyone health and safety.
Biography - 3

Part 3 - The Myth of Narcissus

Over the course of Avatar Adi Da's relentless investigation, the primal mechanism in consciousness that prevented the "Bright" gradually became more and more clear to Him. It was perfectly epitomized in the ancient Greek myth of Narcissus.

Narcissus spent his entire life transfixed by his own reflection in a pond, mesmerized, never suspecting it was his own image.

Avatar Adi Da observed that — in the same way — people are always only "meditating" on their illusory sense of separate self, turned in upon themselves and living out the imagined dramas of their own mythic scripts.

Avatar Adi Da saw that this mythic self-concept, the separate persona and its dreamed adventure, was all-pervasive — common to all. And He saw that this imagined character can never be made happy and that only awakening from the dream can bring happiness.

Narcissus must be drawn into free conscious life and relationship itself, surrendering his deluded obsession with the self-image in the pond.

Eventually, I began to recognize a structure in my humanly-born conscious awareness. It became more and more apparent, and its nature and effects revealed themselves as fundamental, inclusive of all the states and contents in life and mind. My own "myth" — the governor of all patterns, the source of presumed self-identity, the motivator of all seeking — began to stand out in the mind as a living being.

This "myth", this controlling logic (or force) that structured and limited my humanly-born conscious awareness, revealed itself as the self-concept — and the actual life — of Narcissus. I saw that my entire adventure — the desperate cycle of Awareness and its decrease, of truly Conscious Being and Its gradual covering in the mechanics of living, seeking, dying, and suffering — was produced out of the image (or mentality) that appears hidden in the ancient myth of Narcissus.

The more I contemplated him [Narcissus], the more profoundly I understood him. I observed, in awe, the primitive control that the self-concept and logic exercised over all of my behavior and experience.

I began to see that same logic operative in all other human beings, and in every living thing — even in the very life of the cells, and in the natural energies that surround every living entity or process. It was the logic (or process) of separation itself, of enclosure and immunity.

It manifested as fear and identity, memory and experience. It informed every function of the living being, every experience, every act, every event. It "created" every "mystery". It was the structure of every imbecile link in the history of human suffering.

The New Process and Circumstances

As the structure and inexorable "logic" of Narcissus revealed itself to Avatar Adi Da more and more deeply, His exploration continued to expand in many new directions. He examined occult teachings and the work of C.G. Jung. He investigated Spiritual possibilities, East and West, including traditional Advaitic and Buddhist texts.

Taking a house in the California hills above the city of Palo Alto, He spent hours in the wilderness and privacy of the nearby beaches — always in the midst of this passionate exploration.

However, He began to have powerful visions of His first living human teacher, visions which led Him back to New York City.

Avatar Adi Da's visions included a clear image of an art store, and not long after His move back to New York City, He came upon the very store He had seen psychically, in Greenwich Village.

The owner of the art store turned out to be a Western yogi in the Kundalini Yoga tradition. His name was Swami Rudrananda, and he was known as Rudi. Avatar Adi Da had found His first Guru, and He surrendered to Rudi with complete obedience.

For several years, He engaged in rigorous Spiritual practice under Rudi's guidance. Avatar Adi Da later said that this intense practice stabilized life-patterns, and purified and strengthened mind and body. 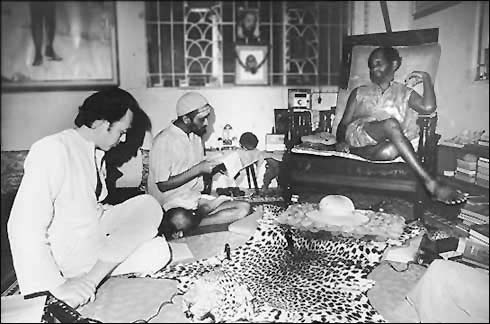 While in India, Avatar Adi Da was led to the samadhi site (burial site) of Bhagavan Nityananda, who was still functioning potently as Spiritual Master.

On the subtle plane, Avatar Adi Da was Spiritually initiated by Bhagavan Nityananda — a tangible blessing and profound dimension of the Divine Avatar's process of Re-Awakening. And so, Avatar Adi Da was passed, in the traditional manner, from teacher to teacher in the lineage.

Pilgrimage to Europe and Middle East

Toward the end of this period, Avatar Adi Da was guided by a mysterious impulse to make a pilgrimage to Christian holy sites, including sacred places in Jerusalem, Athens, Rome, Paris, London, and Fatima. His diary from this time reflects a profound immersion in Christian mysticism.

During this pilgrimage, He underwent a spontaneous purification or "boiling off" of the inherited religious archetypes and images deep in His psyche. He gave Himself unreservedly to this process, just as He had to every other Spiritual ordeal in His great odyssey.

[This experience] drew on all the latent imagery, necessity, and unfulfilled devotional energy that had been trapped in my heart since childhood. Only when these images were completely and consciously experienced, and the feeling-energy surrounding the heart utterly released from its bondage to unconscious symbols, could I remain stably in the True Consciousness that is the Heart of Reality Itself....

I eventually returned to a stable Realization of the fundamental Truth that is the substance of my Spiritual life.

Next: Radiant Happiness and the Futility of Seeking

The Knee of Listening

The Divine Ordeal Of The Avataric
Incarnation Of Conscious Light

For Avatar Adi Da's comprehensive account of His life and Spiritual odyssey, please read His spiritual autobiography, The Knee of Listening.

It manifested as fear and identity, memory and experience.

It informed every function of the living being, every experience, every act, every event.

It "created" every "mystery".

It was the structure of every imbecile link in the history of human suffering.

Listen to
Avatar Adi Da Samraj
read His own description of the unique State of Spiritual Freedom He enjoyed from birth.